Where you start can matter…

To illustrate this point, I chose to use a standard tradesman’s very time-friendly dovetailing technique on a piece of very soft, quickly-grown pine.

It was actually a floorboard offcut, not really suitable for even moderate-quality woodworking.

I worked ‘pins first’, following the usual routine of marking the pin profiles and their flanks and then used a dovetail saw to cut down to the tail socket base lines.

To remove the waste between the saw cuts, I deliberately chose to start to chop on what, on a real job,would be its inside face.The chisel started half-way down the tail socket with its bevel facing end-wards. I worked towards the base line by making the three cuts you see on the underside of the photo. Following custom, I then turned the wood over and repeated from the other side. On the right, the chisel is shown part-way through the penultimate cut.

The force of the final blow was taken by the nib of wood you can see just below the chisel.

As the cut progressed, the un-supported wood fibres bent and then broke so that the fibres were torn out by their roots, thereby leaving a void.

During the final cut, the fibres were therefore hanging over thin air, as it were, so the force of the blow also made them break out. (From experience I knew that the chisel would crash through, so I protected the bench top with a chopping board).

On full completion of this stage, all the socket floors (lands) will have similar cavities. The fastidious worker might find them unsatisfactory.

Do They Really Matter?A City & Guilds or GCE (UK examinations) examiner might, when looking at test pieces, be somewhat aghast at this sight, but as far as the strength of a proper job is concerned, the answer might be ’really not very much’. After all, we do know that end-grain does not adequately bond, so the loss of gluing area need not be very important.

What really can matter, is just where the cavities appear. You can see that one side of this particular cavity is only a knife line’s depth from the wood’s surface, ie the outer surface of a real workpiece. The outer surface is, of course the surface that almost invariably has to be planed after gluing-up.

When it does matteris when the joint is sawn through to produce a toolbox lid. Sometimes a box sides have to be planed to fit a space or shaped for decorative reasons. In these situations the cavities could be revealed.

The cavity is revealed as the plane cleans-up the outside of the joint. Because the above cavity was so near to the surface, it only needed a few strokes of the smoothing plane to reveal the kind of disaster you see illustrated. 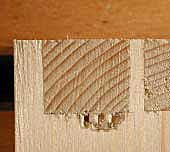 Had I started chopping from the outside face, the same thing could have happened, yet the void would have been near the inside face of the job.

Unless we actually want to loosen the dovetails, we should never plane the inside face of the pin-bearing piece; therefore being on the inside face, this void should remain untouched by a plane.

An alternative routine:This might take rather more time, yet you can still get some speed with better quality surfaces and no cavities.

Chop vertically, eventually going up to half-way through from each side, but with the bevel facing the base line.

This produces these sloping surfaces and a humped floor. 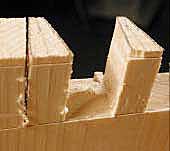 While swift, chopping as described in the first four pictures is a pretty brutal business that will always create similar cavities. Thankfully they are usually smaller, and the expert ensures that they occur in the centre of the socket floors.

Over the years I have seen various stratagems that, while still relying on chopping strokes, painstakingly seek to overcome the cavity problem, but I fear that I have not yet been able to make them work. Maybe I did not try hard enough!