A Woodworker’s Notebook
Jeff Gorman
A Ramped Shooting Board 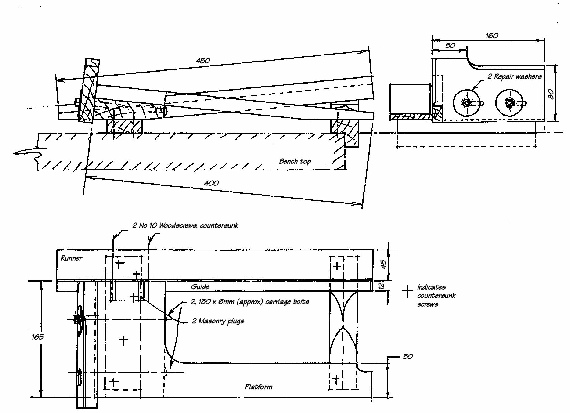 This has a fairly complex construction since I wanted it to be light to handle - I keep it next to my sawing board.

It is intended chiefly for planing end grain. The ramp has the advantage of extending the wear over a greater part of the cutting iron. Also the start and end of the cut is gradual. Instead of the whole (working) width of the blade entering and leaving the cut at the same moment, there a gradual engagement and disengagement. At the start of the stroke, this slightly reduces the bang and at the end of the stroke it can reduce breakout (called spelching).

The effective cutting angle is unchanged. The ramp gives the illusion of slewing, but is really only making a diagonal cut with the plane travelling in a straight line along its axis.

It is best to make the separate bearers and fix them temporarily to a baseboard. With angles such as 1 in 10 a small error can make a significant difference, so some trimming might be needed here and there.

I used the traditional European Beech, though any decent hardwood should suffice.

Note that the height of the fence should be a little greater than the width of the plane. 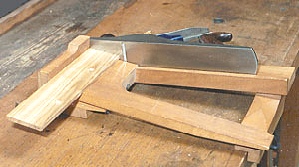