Basically, the answer is that the appropriate grinding and honing angles for any kind of plane depend on the quality of the steel.

Most manufacturers seem to grind at 25° and recommend a honing angle 5° greater, making this 30°. Usually (though not always) new plane irons are supplied ground but not honed.

Consider what happens when a new iron is honed for the first time. You form a nice narrow 'honing bevel'. Each subsequent sharpening will take longer as more and more metal has to be removed as you progress up the slope of the grinding bevel and the honing bevel broadens. (Since we are not discussing chisels, there's no need to be sidetracked into the old argument about the relative strengths of tools with one bevel or two).

Eventually most workers will decide that it is time to have an easier life and re-form the grinding bevel. Note that the lower this angle, the longer it will be before the tedious re-grinding becomes imperative. For this reason, the thick, laminated irons fitted to wooden jack and similar bench planes are frequently found to be ground to about 12-1/2°. So, subject to not reducing to ridiculous angles, there is some discretion in the actual grinding angle used.

Considering that manufacturers have to consider everything that happens to the irons before they reach the vendor's shelves, I suspect that the 25° angle is a compromise that reflects their experience. Given a decent quality of steel, for softer woods, you can hone at less than 30°, but the on hard woods the edge might rapidly wear.

Some irons are tempered to be harder than others are. (With experience, one can tell an harder steel from the feedback experienced while rubbing the iron on the abrasive).

If you are habitually going to hone at a lower angle, the grinding angle will also need to be reduced.

Hard edges will take longer to sharpen, but will last longer between sharpenings and last longer on hard or abrasive timbers but are more likely to break down when hitting resistances such as hard knots.

Honing at a greater angle will give a stronger edge.

The planing action is different when the stroke starts at the end of a workpiece than when, as is often necessary, it starts amidships. When starting amidships, the edge honed at the greater angle will have somewhat greater difficulty in penetrating the surface of the workpiece

The rebate plane and the spokeshave are bevel-down planes. The remainder are bevel-up planes.

The higher angle might be better for working some tearout-prone timbers. For a 12° block plane, a 30° honing angle forms a somewhat 'sharper' 42° cutting angle. 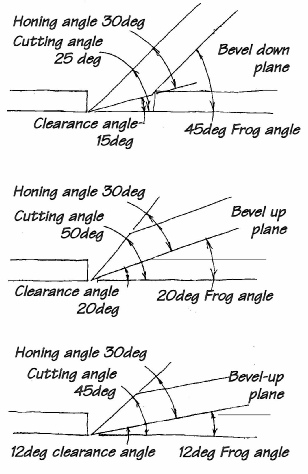 Bevel-up planes are regarded as especially suitable for working end-grain. If you reduce the honing angle below 25° you will can lower the cutting angle and be able to attack the wood fibres more directly sideways-on.

Although shoulder planes will easily plane rebates, they are principally designed for planing end-grain, so they are bevel-up planes. Since the sides of the iron must project very slightly beyond the sides of the plane, there is absolutely no scope for lateral adjustment to prevent the plane cutting more heavily on one side than the other. You need therefore to form the edge exactly at right angles to the longitudinal axis.

Routers are bevel-up planes, but I note that the one-piece irons in my collection (for some reason I have three) all appear to be ground at about 45°. The alternative detachable spear-pointed cutter is ground at about 25°. Note that the angle should always be measured at right angles to the edge.

I hope it is evident that one need not be too fussy about grinding angles providing that they are less than the intended honing angle, but it seems to me that there is little point in careful consideration of honing angles unless they can be reproduced pretty exactly. After many years of un-guided honing I know just how unreliable this can be so I'm now a fervent convert to honing with the aid of jigs. SeeA Honing Jig for Plane Irons.