For the first seventeen of my woodworking years, I had to maintain a kit of 20 jack planes plus a trying plane, smoothers and 60-odd bench chisels. Hand honing had to be the order of the day, but I never felt I had a consistent bevel angle. Furthermore, I was spending too much time on some edges.

A couple of tricks to settle the angle

Adjust the inclination of the iron while inspecting the angle from a low-down sideways view, and try to maintain the angle as you straighten up.

Alternatively, put a dab of oil on the backface and see if it flows onto a thin film of oil on the surface of the stone. If there is a gap, is shouldn't flow. If you get the angle too high, you can feel that the iron is trying to plane the stone.

What can happen is that as after several sharpenings the honing bevel becomes wider, and thus abrades more slowly. If the angle is too low, the heel of the bevel gets honed - you can sometimes tell this by the feel of the iron on the stone. The natural tendency is to raise the angle, probably going too far and achieving a somewhat rounded bevel (but see below).

To maintain a fixed angle

The trick is to use the right shoulder as a pivot, and use the left hand as the power provider. Freeze the rest of the right arm as much as possible, but unless the body is moved as well, or the hand makes subtle adjustments, I do not see how it is possible to avoid the motion being similar to a swinging rod.

Straight up and down

There's no need to make the job more difficult by indulging in fancy figure-of-eight motions. For obtaining the necessary camber, see the section Planing a Square Edge

Some people advocate freezing the upper body and rocking on the feet.

I have seen it suggested that the far end of the stone be raised and inch or two. This makes geometrical sense, but I've never seriously tried it.

If you ask some old tool dealers what was the state of the majority of bevels of second-hand planes/chisels they buy, I bet they would say that they were rounded. Try yours with a ruler on the honing bevel! 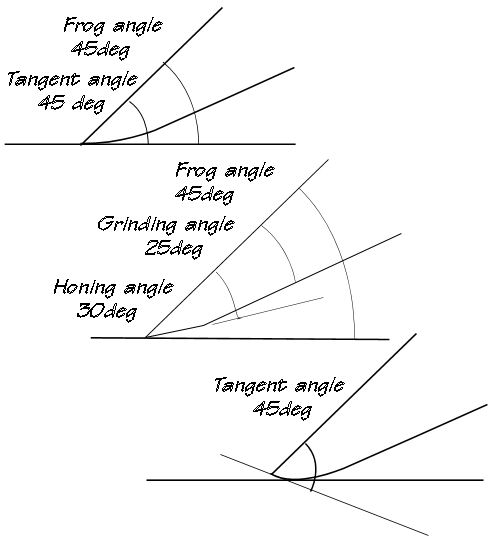 If a tangent to the rounded bevel makes an angle no greater than 45°, the edge will cut.

The normal situation. A 15° clearance angle

If the tangent angle is greater than 45°, the bevel will rub on the wood without cutting.

No risk if you use a honing jig though (A Honing Jig for Plane Irons)!

Alternatively If your sense of man/womanhood requires you to hand hone, make it easier by fairly frequently re-grinding the grinding bevel, so keeping a narrow honing bevel and reducing the difficulties outlined above.