Machine-cut dovetails were made on a single-spindle moulder with the aid of a dovetailing attachment. For most of the tests, cutters without wings were used. Some tests were made with winged cutters but no quality difference was reported.

Note that this means that the bottoms of the lapped dovetail sockets would be rounded, and the hidden parts of the tails likewise. Hence the tests are not strictly comparable to hand-made joints (or router jig imitations), but it seems (to me) reasonable to assume that the principal conclusions will apply.

The joints were tested by a direct pull on a hydraulic testing machine, the socket board being horizontal.

African Mahogany (Kahya Ivorensis), Whitewood (Picea abies). All samples for each species were cut from the same baulk to minimise differences due to variability of natural material.

16 tests on mahogany, and 40 on whitewood. As the strain was imposed, the load first rose steadily while visual examination showed a "stretching" with elastic deformation of the tails and to a lesser extent, the pins.

As the strain increased a point was reached at which the load dropped momentarily before continuing to rise. This discontinuity in load was due to the slipping relative to one another of the two parts of the joint.

The applied load was between 1000 and 1700 lbs on a 6" wide joint in mahogany. This was regarded as the point at which the joint would have failed in service. By continuing to pull to complete destruction, it was found that joints could bear between half and one ton.

At first slip (ie the above point) all failures were the same, ie compression of the tails fanwise permitting the slip. At ultimate destruction, there were several modes of failure.

At 15°, tails closed up fanwise sufficiently to slide out, with only a slight tendency for the top corners around the recesses to break along the grain and pull up. This latter mode of failure became more marked with increasing angle until at 35.5° large pieces of the socket bearer were pulled up. In the whitewood all the joints failed by the tails closing up, even at 35.5°. These subsequently opened out again, almost to their original size.

Mahogany only used. Tested four days after gluing with an urea-formaldehyde glue and separate-application hardener. All joints regardless of angle failed by shear along the short grain, leaving wedge-shaped sections behind in the sockets. 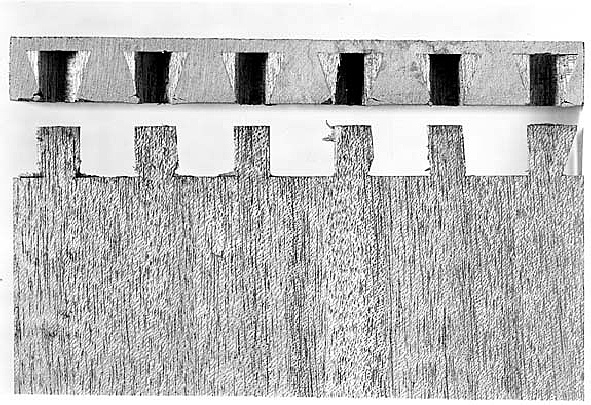 An unexpected result was that the ultimate load for the larger angles should be less when the joints were glued than when dry. They seem to put this down to the wedging action of the dry joints putting the tails into compression across the grain, thus increasing the shear strength across the grain.

The larger angles may be considered to appear stronger, but the results of these tests show that, where the gluing of the joint can be absolutely relied on, there is no gain in employing included angles wider than 15 deg (1 in 7-1/2 ), while if the gluing is not taken into account, the wider the angle the stronger the joint, up to the 35.5° (1 in 3-1/4) tested.